As reported in the Barnsley Chronicle on 26th July, Stephanie joined the Alzheimer’s Society photography exhibition in Parliament recently to showcase the human cost of the dementia care crisis.

The photo exhibition, 'Dementia Care: The Crisis Behind Closed Doors', depicts the human cost of a care system that the charity claims is unfair, unsustainable and in urgent need of reform up and down the country.

At the exhibition, Stephanie met with people affected by dementia to hear about how the dementia crisis has affected them and their families.

Alzheimer’s Society is calling for a Dementia Fund in the upcoming Spending Review to end the dementia penalty, bringing fairness into the system and improving quality of care.

“I am proud to stand with people affected by dementia and make the case for more funding for dementia care in the upcoming spending review.

“One million people will have dementia by 2021 and it is vital that we are able to deliver high quality dementia care to everyone that needs it." 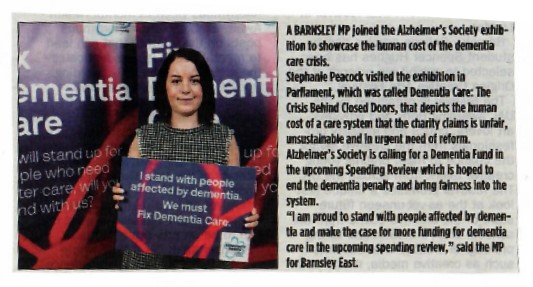